I’m going to have to write about grief and related topics for a while. Because duh! read my last post, it is not possible for me to deal with anything else at this time.

I’m currently located in the deep end of the nihilistic swimming pool. The reason to write about it? Nihilism is really boring and I’m bored of that boringness. So this is busy work…a task invented just to help the time to pass.

Here’s some stuff about Nihilism. Short version from the introductory paragraph:

Nihilism is the belief that all values are baseless and that nothing can be known or communicated. It is often associated with extreme pessimism and a radical skepticism that condemns existence. A true nihilist would believe in nothing, have no loyalties, and no purpose other than, perhaps, an impulse to destroy. While few philosophers would claim to be nihilists, nihilism is most often associated with Friedrich Nietzsche who argued that its corrosive effects would eventually destroy all moral, religious, and metaphysical convictions and precipitate the greatest crisis in human history. In the 20th century, nihilistic themes–epistemological failure, value destruction, and cosmic purposelessness–have preoccupied artists, social critics, and philosophers. Mid-century, for example, the existentialists helped popularize tenets of nihilism in their attempts to blunt its destructive potential. By the end of the century, existential despair as a response to nihilism gave way to an attitude of indifference, often associated with antifoundationalism.

I don’t know what antifoundationalism is, I mean I can guess considering the context but I don’t feel like looking it up for the particulars.

I was reading about Zen sickness. It affects some people who seek an emptiness (shunyata) that is characterized by nihilism. I was reading something by Gary Ray quoted on The Zennist’s blog. Now I don’t agree with the basic position of The Zennist at the best of times but this quote was kind of interesting. Ray was “editor and publisher, of the defunct Buddhist journal, CyberSangha, [who] wrote the following editorial comment, Why Can’t Zen Buddhism Find an Online Home?”

Attachment to emptiness is so common that the term “Zen sickness” is often used to describe it. Sufferers of this malady run around telling you that “everything is empty” and nothing really exists. In discussions, when these people don’t know the answer to a question or don’t know how to pursue a meaningful dialogue, they often resort to their emptiness claim to stifle conversation, or worse, appear wise. A recent discussion in alt.zen was composed of a someone asking where the Zen was in the discussion group, since everyone seemed to be ranting and raving about new age teachers and Hindu philosophy. The response to his question was overwhelming, as many people slyly informed him of the “emptiness” of the conference. Heck, it doesn’t have Zen because it’s empty. True emptiness represents a lack of permanent form, pregnant with potential for unlimited growth and development. The emptiness discussed in these conferences is a growth impediment, since discussion immediately stops when the emptiness word is used. A response one of my Zen teachers often used when confronted by an emptiness spouter was: “Does emptiness feel pain?” This is especially effective when brandishing a big Zen stick (or listserv software).

This reminded me of the story I read somewhere else about a guy doing Zen training who didn’t want to give up a retreat to go to be with his father who was dying. Because “emptiness”. That’s just stupid.

Nihilism and shunyata are very different things. Attachment and connection/interdependence (Pratītyasamutpāda) are not the same thing. You can love somebody without attaching to them like you own them or you are owned by them.

There are nihilistic moments, like in some of the stages of grief. This is what I’m talking about. In it’s place it may have a function. I am finding it having a function for me presently.

However it is not something to seek. When it comes it has to be recognized also or it turns pathological. It distances one from life. Sometimes, like in grief, a bit of distance can be welcome so as to make sense of the situation. But there are downsides to taking nihilism even as a temporary medicine.

To paraphrase the alchemist Paracelsus “The difference between a medicine, an intoxicant and a poison is in the dosage.” Zen sickness turns nihilism into an intoxicant. Sociopathy turns it into a poison. Grief can make use of it as a medicine but the dangers of that have to be in the forefront of consciousness at all times.

It is the characteristic of being trapped in an is-ought paradox, or to put it another way a cognitive and emotional dissonance.

That is characterized like this. When I phone his number he ought to answer, but he can’t because he’s dead. All my (our) beliefs and plans about the future are just hanging somewhere in the air. They can no longer be enacted. So there is a big blank space all around me now. I cannot see much and have a very limited perspective. I know that. That is what grief does. It narrows perspective so we can focus on it. We need to do that so we can adjust our general perspectives now that things have changed, radically. We need the time to get our new bearings.

So this isn’t a neat little phase like Kubler-Ross outlines. There’s a real urge for denial but facts don’t allow that and that makes me plenty angry. And there’s a bunch of other emotions somewhere but I can’t find them right now.

Everything looks and feels very flat and cartoonish. There is no depth. There is no feeling about much of anything, except a certain simmering anger, though that’s not anywhere near the surface right now (or I couldn’t write this and would probably throw my laptop off the balcony).

For people that say too much intellectualism is a bad thing, you are wrong. Since I’ve never been in this kind of emotional state before, or if I have I either don’t remember it or it was qualitatively different somehow, or not at this kind of depth, the only thing that is keeping me from utterly giving into it is an intellectual curiosity to explore it.

I would imagine this is similar to the way some sociopaths experience life. I am depersonalized as is everyone else. I feel no connection to anything really. It’s just scenery and not even interesting. Everything is just going through the motions and reciting the standard scripts to people I’m talking to on the phone. Not entirely hopeless since I’ve decided to share this particular aspect of this experience with people, so somewhere there is still something else, but I just can’t access it, nor do I want to at the moment. In some ways this sort of limbo is a bit of a blessing though not some place I want to dwell in for any length of time.

It is a very arid sort of place.

The deep end of the nihilistic swimming pool looks something like this: 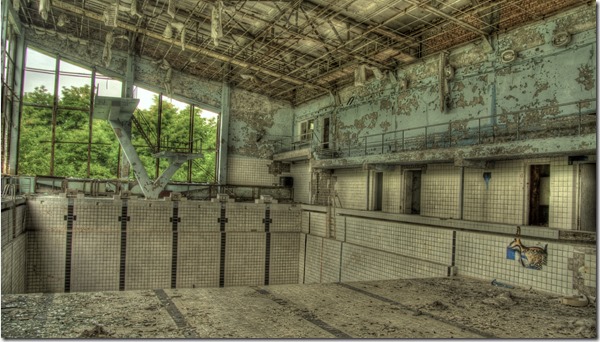 Now without water there’s not really any way to get out of it you may notice. The transition between the shallow end and the deep end is pretty sharp. But if there were water in it right now I’d probably drown because I’ve no energy to try to swim. So…hmmm…this is a peculiar paradox.

Sort of an existential crisis, though not of the immediate emergency sort.

This is also mindfulness of the nth order. It is impossible to not be mindful of the situation. That is what this report is about. It is a sliver of a current psycho-geography.

There are times in life when one is just going through the motions, without any connection to anything, in some kind of autopilot state or playing along with the situation. I can see myself doing that when I have to interact with others. It is like my avatar is interacting with them as I sit in this deep end of the pool and watch remotely and removed. I characterized the moment this happened, when the news hit me, as being broken into a million shards. Struggling against it was like being tangled in a jungle of razor wire. That was a few days ago. So that struggling has stopped and here is where I am presently. Likely this will change too. Psycho-geography is like that. Especially when one is in the depths and not engaging on a shallow level.

It’s the end of a future history.

I would have given anything to be with him when he died. But the doctors say that since it was heart failure and it occurred when he slept he probably wouldn’t have even been consciously aware it was happening. So that’s pretty much the best alternative one could hope for in terms of death I think.

But here I am. Still.

Maybe this is a kind of semi-bardo experience. I don’t know. A part of me has departed with him.

There will be a time to sort through the myriad threads to see which continue and which don’t. This process starts probably subconsciously but I’m not anywhere near that yet.

Presently is like a limbo I am currently taking rest in, though it is not comfortable nor would it be by choice to be here.

Maybe I can just wait for more debris to fall in so I can pile it up to clamber out. Maybe the edges will crumble and create a climbable slope. Maybe it’ll rain and by the time the pool fills sufficiently I can float out. Maybe I’ll have to tunnel out the bottom somehow. I don’t know.

So as I report from this nihilistic wasteland I am currently traversing, I just want to pass this message on from the bardo to those who think nihilism is equivalent to emptiness (shunyata):

“This is not the emptiness you are looking for”

Don’t give me any advice or platitudes like “Things will get better” or I’ll reach through the screen and slap you. I don’t want things to get better right now. I want to be with this completely for as long as it takes and as deep as it goes.

Maybe I’ll just turn off comments because I don’t really care what anybody has to say right now.