Facing my imminent death
I vow with all beings
to go with the natural process
at peace with whatever comes.

…When someone close to me dies
I vow with all beings
to settle in ultimate closeness
and continue our dialogue there.

What is death? What is this?

[thanks to Gary Gach for posting these words]

In the early 1990’s I had the opportunity to meet, do activist work with and enjoy the friendship of two women who each in their own very different ways demonstrated the truth that an individual, and particularly an individual woman, can bring about change in the world. In addition to many other causes, both, with courage and determination took on the mantle of “prison abolition” as their ideal and spent decades working towards it. While “prison abolition” has not come about in Canada, the changes in the lives of the incarcerated, innocents behind bars, the workers in the prison and justice systems and the victims of crime as well, have benefited from the tireless work of these women.

Although Claire and Ruth had very differing backgrounds, approaches and beliefs there was much they had in common. Having visited each of them in their homes upon occasion one thing that struck me immediately was the simplicity of the material lifestyle each of them had. Unassuming homes, few decorations, simple furniture but lots of books. The books in both cases ranged from politics, sociology, law, biography to poetry, philosophy and religion. Not too much fiction, which did not surprise me as neither of them were the escapist type.

On a broader scale the commonalities included a particular view of life which encompassed a fundamental belief in the ultimate “goodness” of humanity. Despite encountering horrific situations the reason to continue working for change was because of this foundation of belief. This ties in with a belief in a basic sense of justice that could heal rather than avenge. Extending compassion particularly to those whom society often felt weren’t “worthy” of it was another shared view. As well the idea that all of humanity has a common ground upon which we stand was shared. And while we may have a great deal of difficulty realizing that common ground, through all our ideologies and factions, it is there for those willing to not only look but see.

Both of these women received an Order of Canada award, the country’s highest civilian honor in recognition of their life’s work. Claire received it in 1995 and Ruth received it in 2001. 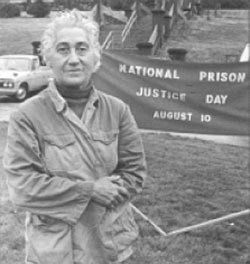 Clair Culhane has been described as a prisoners’ rights activist, author, freedom fighter and rebel. Prisoners gave her the nickname “One Woman Army”, which became the title of a biography about her and that certainly describes the Claire I came to know.

Some few people seem born to a life of activism. Throughout her life Claire worked for change and equality for all.  She was born in 1918, as World War 1 was in it’s final throes. The milieu of global political tumult that followed no doubt influenced her childhood greatly.  As a teenager she became aware of women’s struggles to get the vote in many parts of the world. When she attempted to get training as a nurse in Montreal Canada at the time she was initially denied because she was a Jew. She did win her training and obtained a nursing job after a struggle.

She worked for the anti-fascist movement during the Spanish Civil War which took place between 1936-1939. From there she became knowledgeable about the Communist movement, married (and later divorced) a party worker and worked on labor issues and against McCarthyism throughout the 1940’s and 50’s.

In the 1960’s she fought for abortion rights, and against nuclear testing and the Vietnam War. She spent 6 months in Vietnam as a nurse in a tuberculosis hospital and from there was able to assess the situation first hand and in particular Canada’s duplicitous role there.

She then became involved with prisoners’ rights and worked tirelessly to improve conditions in prisons not only for inmates but also for prison workers and to consider victims in a more global and compassionate view of the justice system.

I very much like the picture of her above. She would look you straight in the eyes when she talked. She was totally present with you at every moment. No turning away.

She was passionate, occasionally strident and utterly fearless.  And deeply deeply compassionate and caring. Her daughter Dara Culhane Speck continues activist work. She is a professor of social sciences at the University of British Columbia and is the award winning author of numerous publications.

A few quotes by Claire:

If you believe in something, you live that life-style.

Somewhere in the human organism there is an ear that will listen, a mind that will open, a heartbeat that will quicken, and a voice that will clamour for the conversation of the border which exalts ‘business as usual’ over one which honours concerns for others. And, when enough people realize this and organize themselves to act upon their convictions, it will change. -quoted in Rowley link below

“Bringing the Outside World In”: Canadian Prisoner’s Correspondence with Claire Culhane, Activist and Penal Abolitionist, 1976-1996 is a Master’s Thesis done in 2002 by Alison Rowley which documents much of Claire’s work and it’s significance

CLAIRE CULHANE – Prison Abolitionist a biographical piece about Claire’s work relating to prisons and prisoners from the prisonjustice.ca network

A biographical piece on Claire Culhane from McMaster University which also holds some of her papers.

One Woman Army: The Life of Claire Culhane … A biography of Claire was written by Mick Lowe.

Claire Culhane: Canadian Peace Activist and Humanitarian From McMaster University’s Peace and War in the 20th Century website, this biographical piece on Claire’s activist work during the Vietnam War.

CLAIRE CULHANE 1918-1996—AN INVENTORY OF HER PRISONER’S RIGHTS GROUP COLLECTION is a listing of her papers, letters, videos, interviews etc. up until 1990 that have been preserved at the University of British Columbia library. As a list it is over 100 pages and the pages of the material itself numbers in the tens of thousands. Several other universities in Canada have similarly large collections of her work. Take a look at the contents summary of the list just to see for how many years and for how many causes, issues and individuals this extraordinary woman worked.[I’ve abbreviated it slightly]

Ruth Morris was a devoted member of the Religious Society of Friends also known as the Quakers, in addition to being a well-published professor of Sociology and a social activist.

She was a strong advocate for prison abolition and an emerging model of justice that called for reconciliation between victims,  offenders and the community. Transformative justice, as it is now known has been instituted in a number of Canadian scenarios with exceptional community support, particularly among the Mennonite community who run a number of these programs and realize healing results for both victims and offenders.

Ruth’s reaction to racism, poverty and the Vietnam war galvanized her social activist stance and when she moved to Canada from the U.S. in the 1960’s she began further work which included a bail program for prisoners, a residence and half-way house for ex-offenders as well as working on getting banking facilities for the poor, a drop-in center for the homeless and a conflict resolution center with a multi-cultural focus.

She was a well published author both academically and outside academia writing dozens of magazine articles and books. She received many awards including the Order of Canada in 2001 shortly before her death.

Ruth was an ebullient yet unassuming woman. Her warmth and respect for all who she met was evident from the first moment. What struck me also was a sense that she was a woman who would not turn anyone away. Acceptance of all, where they were, as they were, without judgment, is not an easy place to be for many of us, but for Ruth it seemed the most natural thing in the world.

The Wikipedia page for Ruth Morris

From an issue of Let’s Talk a journal of Correctional Services Canada,  Ruth receives the Ron Wiebe Restorative Justice Award with photos. (p. 18 of a pdf file)

The publisher’s blurb for the book she wrote called Transcending Trauma relates more about Ruth as an author.

As pessimism, instability and anger grow in the world, those who will not turn away from the suffering of others are needed more than ever.  The example set by the lives of Claire Culhane and Ruth Morris can hopefully inspire others to hold their gaze steady and press on.

If you believe in something, you live that life-style. – Claire Culhane

Back in October I had the idea to do a series of posts about people that have taught me valuable lessons that I still carry with me in life.  I began compiling lists as is my habit. But this exercise has really given me a pause to reflect on my decades of life experience and especially on the thousands of people I’ve encountered in that time. I never thought of it in terms of thousands before. That’s a pretty crowded memory hall.

There will be a whole bunch of people left out.

First my family. If I were to list all of my immediate family and relatives I’d have to post into the next millennium about the things they have taught me for which I am profoundly grateful.

Then would be all the negative teachers. That would be those whose behavior caused me to realize I did not want to behave in that manner. That I did not want to cause the same kind of pain and chaos that many seemed to feel was their right to inflict on everyone around them. Those would be people who were hurtful, selfish, angry, greedy, spiteful, insensitive, arrogant, demeaning, jealous, deceptive and hateful on a regular basis. I have to thank some of them too though. In some cases their behavior kept me from going into the ditch with them.

There are countless writers, artists and other creative individuals whose works have shared amazement, joy and moments of deep reflection that still ring within.

And then I also have to omit all the centuries of Buddhist teachers whose vision, commitment, words and work, passed down through the generations, have served as beacons on the stormy shores.

So that still leaves quite a handful of individuals who, through their way of life, philosophy, personality or religion have given me precious insights into the possibilities of living a fruitful, happy, committed, bountiful and generous life.  I don’t know how else to thank them but with my words.

Have been thinking about teachers a lot lately. Mostly about those who teach life’s lessons just by living in a way that stands out from the rest of the crowd. So I’ve decided to make a series of posts about those who have had some kind of impact and whose lessons I still carry with me.

Some are relatives, friends, acquaintances, co-workers, educators and some are strangers. It’s unlikely you will have heard most of their names before. They aren’t famous and haven’t been on Oprah or written best-selling books. They were and are ordinary yet extraordinary people.