The Public Domain Review has an interesting piece on an old book about Tibetan art. They write:

An eighteenth-century pattern book consisting of 36 ink drawings depicting precise iconometric guidelines for depiction of the Buddha and Bodhisattva figures. Written in Newari script with Tibetan numerals, the book was apparently produced in Nepal for use in Tibet. The concept of the ‘ideal image’ of the Buddha emerged during the Golden Age of Sanskrit rule, from the 4th to 6th century. As well as the proportions, other aspects of the depiction – such as number of teeth, colour of eyes, direction of hairs – became very important.

You can see it all here The Tibetan Book of Proportions

When you watch Tibetan students in class learning to make thankas, this is what they learn. It’s complicated and mathematical, not freeform drawing. Also every element that goes into one has a reason for being there and a deep symbolic significance. You can’t learn it in a month of evening courses. 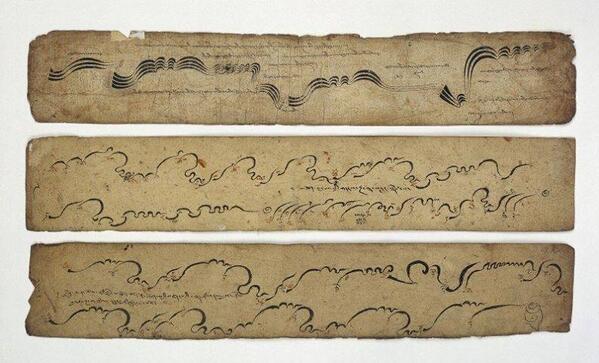 In some thankas, like in some temple decoration, mantras and instructions for their chanting (like the notation above) are included. This makes it not only iconographic but gives it the status of a yantra, which is a multi-dimensional and multi-sense encompassing spiritual device or machine to assist in changing consciousness. It takes a lot of knowledge of multiple disciplines to be able to create a good thanka. It takes some research and study to be able to decode the depth of what you are looking at. They are not “just” religious iconography but whole windows into the Tibetan belief system. They are not just “cultural products” for tourists but are integral to the cohesion of communities.

Here’s what I mean by that.

Manoj & I used to live across from both the Tibetan Homes School (run by a charitable organization SOS Children’s Homes ) and the CST (Central School for Tibetans run by the Tibetan Gov. in Exile ) and they teach this art to some of the older students. The children in the SOS Home are orphaned children of refugees. Manoj was very close to people in the Tibetan community after he lost his parents [his mother when he was 6 and his father when he was 13]. His relatives did all they could but they didn’t live in Mussoorie so many Tibetan people helped support him in a lot of ways. His father also had had a lot of friends in the Tibetan community and worked with them sometimes. In communities that are somewhat off the beaten track and where ways of life are communal, people help each other out and hold each other up when their social structure collapses. That is one of the principle purposes of community. People are integrated on all sorts of levels. This is very different from a capitalist based network society. [I’ll have more to say on that in the future]

Once in a while if I was walking by and class was in session I’d go in and sit on the bench in the back & watch the young artists for a while. There is a Buddhist temple, the oldest Tibetan Buddhist temple in India, on the grounds just outside of both of these schools. There are monasteries and institutes of higher learning, like the Sakya Center, and the big Mindrolling Monastery complex about 30 kilometers away in Dehra Dun. All of these things are connected and support the Tibetan refugee community.

Over the years I bought a few of the thankas from these students [from the schools actually as the students don’t sell them individually] as the proceeds help support the schools and got them “framed” at Mindrolling for which one gives a donation. This is all a cooperative effort, as are many things in the Tibetan [and in much of the Indian] community that I am aware of in Mussoorie. [I’m not going to generalize or try to “speak for” the community there. This is only my observation and experience.]The students are not just taught the techniques to make pretty and “exotic” pictures. They have a far larger social context.

As an aside..if you want to give money to a Tibetan cause or any cause that’s doing actual work on the ground the SOS Homes are really working hard with that money. I’ve seen it in person. I’ve met the kids in these schools. So many of these western “consciousness raising” organizations like UNFFT (run by some countess who dabbles in all kinds of charities when she’s not attending galas or yachting) and Free Tibet are bullshit organizations run by white people (check their boards and executive) for other white people to make themselves think they’re actually doing something and also to bring in substantial salaries and/or attention mainly to themselves. They are parasitic organizations that boost their own profiles by exploiting the tragedy in Tibet and Tibetan people’s work in my opinion. These kinds of organizations tag along at marches and demonstrations organized by Students for a Free Tibet (another hard working worthy group run by and for Tibetan people) for example, contribute nothing to organizing or support and congratulate themselves heartily for whatever they think they’re doing. It’s lifestyle activism at it’s worst. [I have so much to say about these things but I’ll save it for another post] They want to work for Tibetan people without actually working FOR or WITH Tibetans in many cases. If you want to join or support an organization to help Tibetan people find one that’s run by Tibetans for Tibetans or at least has a lot of Tibetan people actually working at it and in executive roles, not just as figurehead “advisors” or as in some cases all white people.

In terms of consciousness raising, here’s the Tibetan Centre for Human Rights and Democracy 2013 Annual Report and Special Report on Re-education Through Labor. TCHRD is on the front lines of monitoring the situation in Tibet. Many of their publications are available in English and Tibetan. They (along with some other organizations) do the on the ground work and compile many reports and get the news and photos that a lot of the Western “consciousness raising” organizations often republish without credit, or compensation.

On the economics side, there are plenty of thanka knockoffs in the marketplaces of the world. People buy them as tourist souvenirs and they are produced in “thanka factories” (often in Nepal) where artists (not all of whom are Tibetan or Buddhist) are trained to produce them as consumer goods for low wages. The colors tend to be garish and the images cliché. Some of this is due to many Tibetan people’s feelings that the selling of religious artifacts for profit is wrong, so others have stepped in to make it a business. When they are sold in monasteries, or when you get the framing done at a monastery for example, their purpose is religious and communal not merely decorative or for the tourist trade.

Those are some of the many reasons I dislike the “knock offs” and those comic book kind of drawings “inspired by” Tibetan people’s art.

One of the reasons I’m thinking about this recently is that I’m involved in a photo swap with some of Manoj’s friends and family. I’m sorting and sending photos to them and they are doing likewise for me. It’s like trying to weave over the emptiness with memories.

seems grief gets worse before it starts to get better…

like a slow motion fracture across the emotional landscape

my hands start to shake

Here is Buddha statue at Mindrolling Monastery, Clement Town, Dehra Dun, taken from the upper level of the temple.

Here is one of the signs within the monastery complex.