I don’t usually write too much on ecology, green, etc. as there’s plenty available elsewhere. Some of it interesting and useful and some of it is a redressed consumerism.The consumerism issue is one that was written about in the post Right Lifestyle a while back.

Today though I ran into a post that brought up some interesting issues. Nutritional Value of Fruits & Veggies dwindling which appeared on elephant journal. I commented there but want to expand on those ideas. 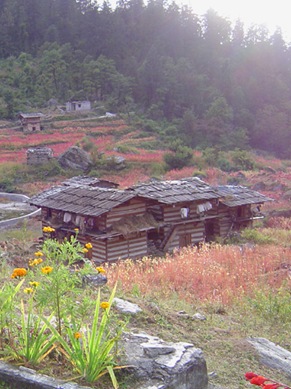 Seed banks are being set up at rates that can’t keep up with the extinction of plant species. Seed banks collect diverse kinds of seeds in case disease, disaster or extinction befalls specific types of plants. Since uniformity in farmed species has become the norm many heritage plants including grains like amaranth and spelt, as well as many varieties of vegetables are not grown on any kind of scale except by hobbyists or in remote areas. Seed banks are expensive to operate because the plant material has to be kept in conditions with proper humidity and temperature or it spoils.

All this does not bode well if disease strikes a particular cash crop.

Consider the example of bananas. When farmers start cash cropping bananas they tend to plant only that “perfect” banana that the foreign markets want. The local varieties, with all their various tastes and textures begin to vanish. One of the main problems with this is that if a plant disease strikes the cash crop it will wipe them out. Other varieties may be naturally resistant to such disease. In 2001 the main varieties of bananas were stuck with a fungal disease called Panama wilt. This was a global problem brought on weather patterns that occurred at the time.

There are banana species that are resistant to this however they are not so “pretty” as the Chiquita or similar brands and are only grown in small quantities for local use.

Do you know how may types of tomatoes exist? Around 7500. But if everyone is eating only the mass produced supermarket varieties there is no incentive for farmers to plant other types. The same is true with mangos which have over 2500 varieties, as well as oranges, lettuce, cabbage, onions and many others.

In the Andes, for example, some 3,000 potato varieties are in use, and in Java, some home gardens have more than 600 plant varieties!

Did you know that about 96% of the commercial vegetable varieties available in 1903 are now extinct, and that today, 90% of our food comes from just 25 plant and 8 animal species? This situation presents potential risks for global food security and nutrition.

It is no wonder then with limited variety, genetically modified, chemically fed food sources that vitamins, minerals, protein and trace elements are missing from so many diets.

There are some solutions. By going for the advertised or most common brand of any sort of vegetable it is endangering the entire food supply, ruining the nutritional value of food and encouraging corporate profiteering. . So consider buying/planting/eating some of the lesser known varieties.

These diverse and interesting varieties are heritage or heirloom vegetables.

Typically, heirlooms have adapted over time to whatever climate and soil they have grown in. Due to their genetics, they are often resistant to local pests, diseases, and extremes of weather.[1]

This is important because many of the Genetically Modified varieties of vegetables created by the multi-national corporations are bred specifically for the purposes of being resistant to pests and diseases as well as to curtail natural seeding. The latter is to enable the corporations to patent and sell seeds to plants that no longer give viable seed for the farmer to continue growing. Heritage varieties do seed naturally so crops can be planted in perpetuity. This means with heritage seeds, plants can be grown from the seeds of the vegetables you or the farmer produce. No need to continue to buy more seed from corporations. It is sustainable. As well heritage seeds help to maintain the genetic diversity of plants. .

Some say GM foods are contributing to genetic diversity. The problem is when you rapidly accelerate or modify one part of the ecosystem it unbalances the entire system. In natural evolution and diversification of species changes are incremental not whole sale. The rest of the ecosystem has the opportunity to adjust to the changes.   Consider the situation of bees in North America as an example.

Open pollination, such as is required for heritage crops, is facilitated by insects, particularly bees as well as wind, birds and other animals. Bees are not only wasted on GM crops, which don’t require such pollination, GM crops are not suitable for bee food.  Bee colony collapses have increased dramatically with the introduction of GM food sources. We have to consider the results of rapid food modifications.

The magazine truthout has reprinted an article from the German magazine Der Spiegel on the effects of GM crops on bee populations. In the US many bee colonies are dying. One possible reason is

…the fact that genetically modified, insect-resistant plants are now used in 40 percent of cornfields in the United States could be playing a role.

from Are GM Crops Killing Bees?

The whole article is worth a read.

So we have choices to make. The cheap, uniform, relatively juiceless and tasteless supermarket tomato or the rich colorful tasty heritage tomatoes. 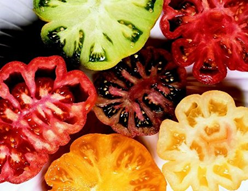 Uniformity is fine for…manufacturing I guess, but not for food.

A Breakfast Recipe for Heritage Tomatoes

Cut some tomatoes in half along the middle. Sprinkle with finely chopped hot green chilies, tiny amounts of salt and turmeric, then a little Demerara (natural brown) sugar. Saute slowly face down in a little butter until sugar dissolves and tomato is hot and juicy. Serve on warm toast slices in the same way one does with poached eggs. You can also use a couple of steamed spinach leaves instead of toast. I guess that would be the Florentine version.

Global Food Crisis from Science Alert Australia. A collection of articles on food issues around the world.

Banana: Africa’s untapped gold mine  from The Times of Zambia. Discussion of cash cropping bananas, banana diseases as well as a lot of advice on how to grow bananas should you feel inclined to do that

Heritage, Heirloom and Traditional Breeds from Sustainable Table. An interesting read with some astounding figures. Also talks about heritage meat sources as opposed to current market types. Good sources and links listed at the bottom of the article as well.

Death of the Bees: GMO Crops and the Decline of Bee Colonies in North America from globalresearch.ca An article that discusses GMO protein modifications as a possible source for the bee deaths and a possible reason for increases in colon cancer in humans.  Includes a lot of reference links.

Genetic diversity is important in humans too.