[The DOD is the Department of Defense in the American government for those international readers who may not be familiar with that acronym. It is responsible for the armed forces of the United States]

From the U. S. Air Force

One thing military types are good at is dismantling something into it’s constituent parts and outlining that process, from an operational procedure to a tank to a country. Unfortunately the more complex the dismantling, the more difficult the reassembly becomes, especially when there is lots of death involved.  But for now I’ll not go there lest someone think I’m wanting to indulge in soldier bashing in this post. Not so. My father was involved with the Canadian Army Engineering Corps as a Sergeant so that gives me an additional perspective here. It is:  Armies do not cause war. That is left to others. Some of those others I’ll get to in a minute.

The world of online communications does not escape the eye of the military in terms of delineating an outline and suggesting an efficient method of assessment.

The American Air Force has provided it’s members with a lovely flow chart on mindful blog commenting entitled “Air Force Web Posting Response Assessment V.2”.  I found it on the website Global Nerdy but it has been distributed far and wide as the trackbacks on that sight indicate.

Click on the image for a larger size display. 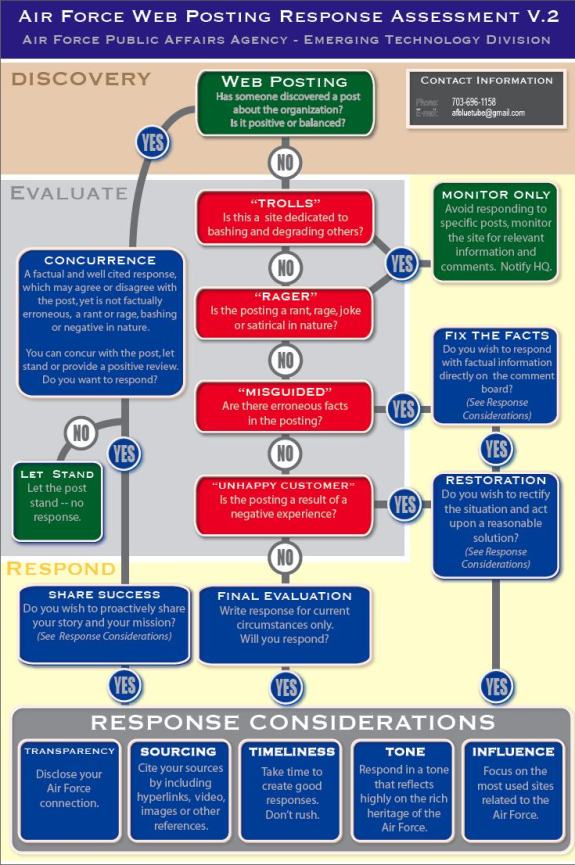 What can be noted here is the reasoning process that goes into  both the decision to respond and into the content of the response itself. By taking the time to allow immediate reactions, particularly of an upsetting variety, to settle there may be a better outcome than a knee-jerk reaction.

Questioning is an important part of serious Buddhist practice as well. And it isn’t just the big questions that matter. Sometimes smaller questions along the way can alter the entire outcome of a situation.

A while back I came across a document entitled Thinking About the Business of Intelligence:What the World Economic Crisis Should Teach Us written by a couple of CIA analysts. It was part of a conference proceeding on security.

The little side burb states:

There is much for intelligence professionals to learn from the follies of economists, and from this folly in particular.

The lessons from folly are numerous indeed, as the various CIA follies over the years have demonstrated. But I don’t wish to indulge in CIA bashing (much) and instead want to examine a couple of interesting statements and conclusions that report cited brought up. It seems the CIA is discovering a few Buddhist principles.

We are overly sanguine about how close our information and intelligence sources approximate reality.

Our understanding of causality and sequence leaves much to be desired.

sense-making can never be contained in a finished product created by a lone expert; sense-making can only occur at the confluence of many different points of view…the complexity of the modern world has outpaced the capabilities of our current intellectual and informational models. These do not always accurately approximate reality…complexity is clearly the key theme

We often assume decisions are the start of long term, committed relationships—but sometimes decision making is just a one night stand…we… often behave as if our version of the truth—our “decisions”—take on Talmudic proportions (only this, one might argue, could justify the time it often takes us to deliver our considered judgments). We treat the decision space as though it is preparation for a committed relationship…

We too are in danger of failing to understand. Our rule-based and single-method approaches are adequate for tackling orderly problems but fall short in terms of helping us to master the chaotic ones—yet if we continue to ignore that chaotic problems do exist and profoundly affect our world, it will be at our peril

…we, too, have an irrational attachment to rationality. We all tend to underestimate the importance of emotions when we attempt to understand the actions of world leaders or the sentiments of a population.

This requires acknowledging that systems often viewed in the past as stable entities that need significant shocks to disintegrate are just as often veined with many minute and therefore largely unseen fault lines that can be activated by very small disturbances.

And here we have another lovely chart, this time defining two different world views.

Which world is the real world?

If any CIA folks wish to respond I refer you to the chart in the first section of this post. (Rebirth)

2 comments on “Dharma Lessons from the DOD and the CIA”